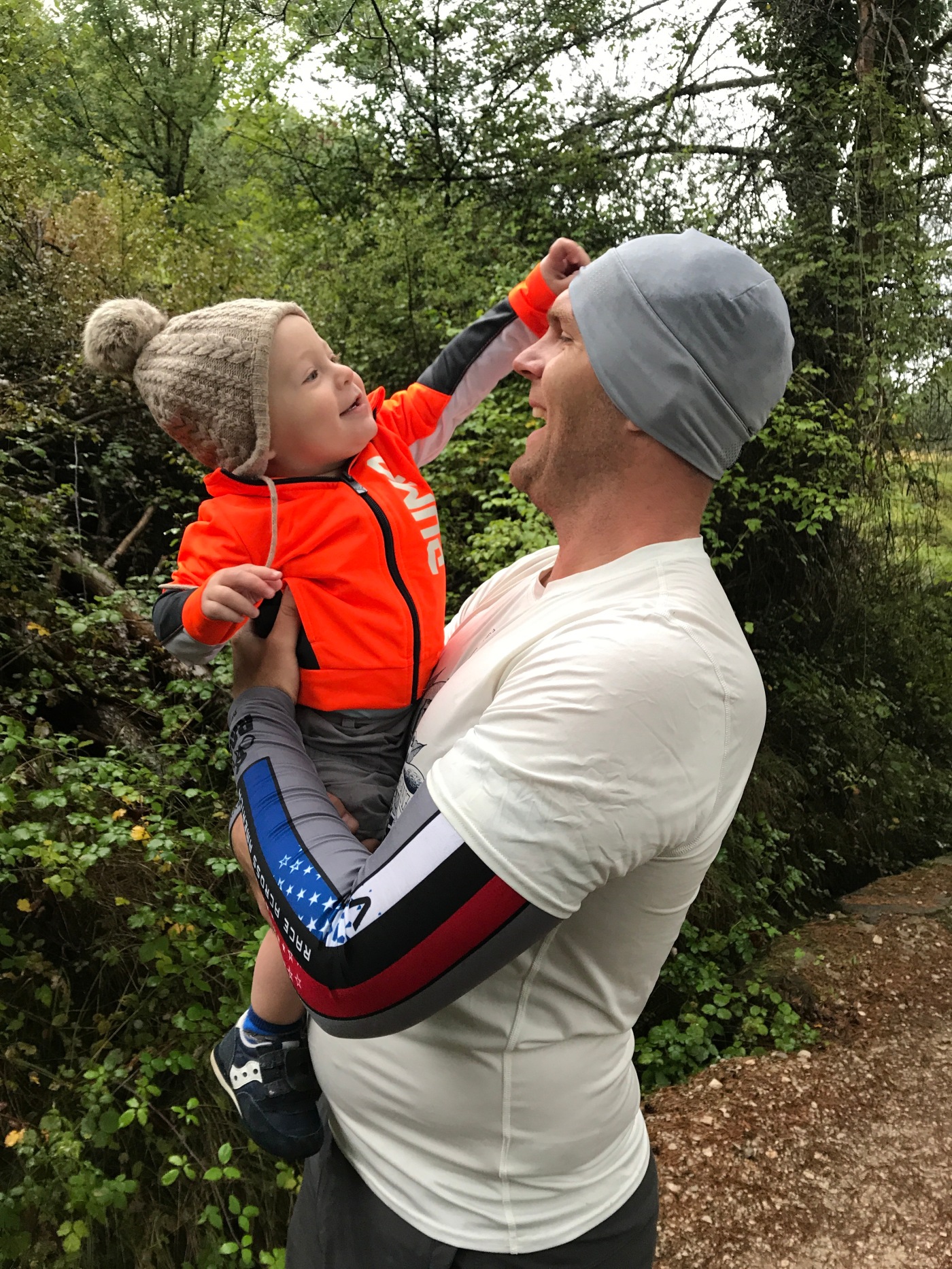 Leaving sunny California on a Sunday evening, Hudson took a 10-hour flight into Madrid, Spain with his parents Kristin and Rob. After a great deal of laughter and talking with the other passengers, Hudson slept well with two full seats to himself between his parents on the ends. The next day included a shuttle, a high-speed train, and a restless night sleep in Pamplona, Spain before taking a bus on Tuesday morning and officially arriving in St. Jean Pied-de-Port and walking off the bus an official pilgrim of the Way of St. James. Hudson and his parents decided to take another night sleep before starting the first day journey of their walk. 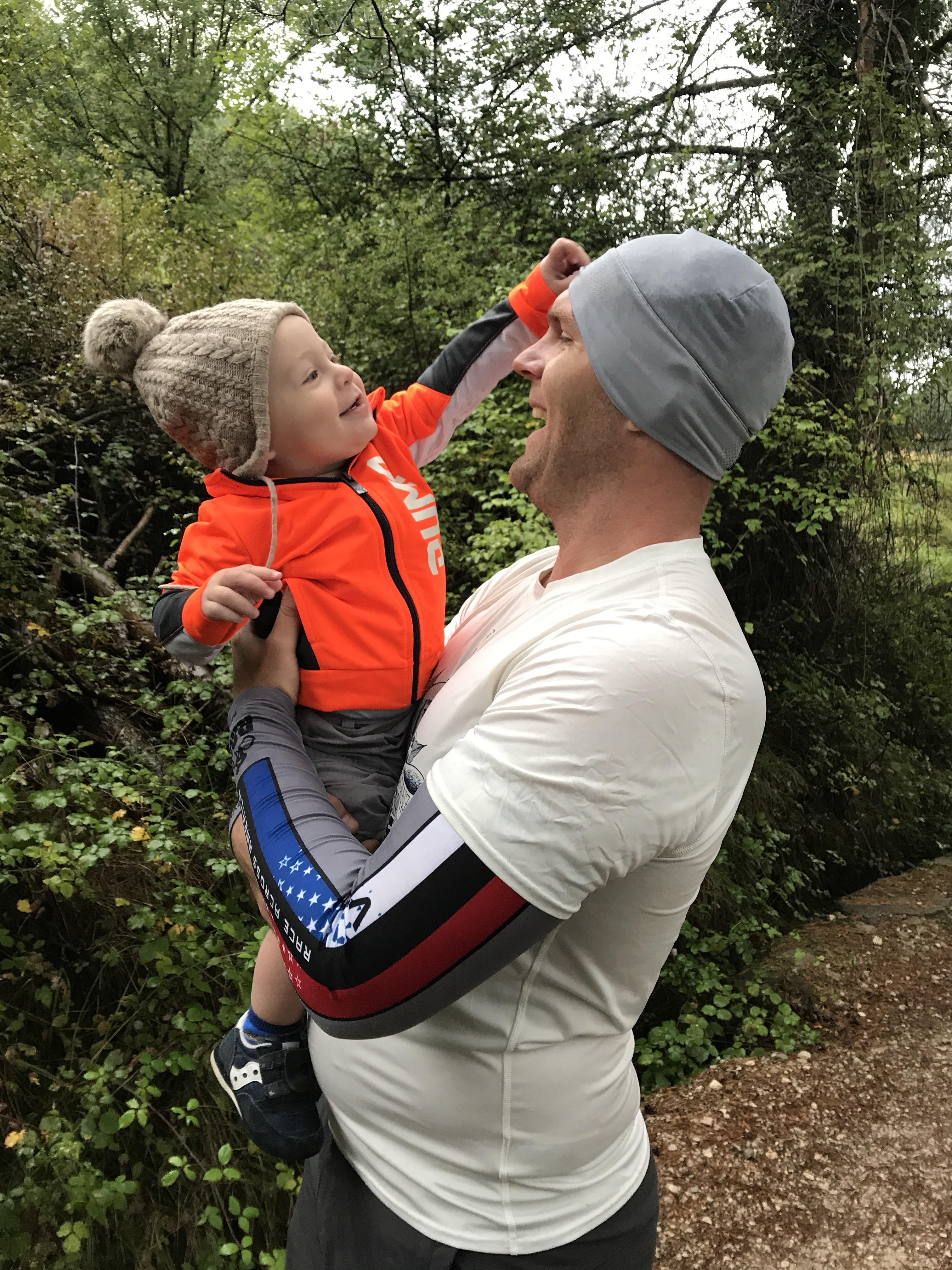 The first week of the Camino de Santiago has been filled with crossing over the Pyrenees mountains. We have been traveling an average of about 15 miles or 25k a day over sometimes muddy and steep terrain in his trusty BOB stroller. This included long sections where Hudson had his arms bouncing away and that typical smile as he was strapped to his mom with the Ergo 360 front pack while Dad navigated the rocky steep terrain. It was difficult but not impassable. A few highlights: the thunder and lightning that flashed across the sky on the morning of the third day, rolling through the mud much of the afternoon and many more. The farm country is beautiful with many cows, horses, ponies, dogs, cats, and other animals to look at along the way. Another highlight is going over bridges and at one town Hudson had the pleasure of walking across his first stream.

At just over a year old, Hudson may be one of the younger pilgrims on the trail this year. He is definitely the youngest in the group around him. He is full of his usual joy, curiosity, and smile that are spontaneously infectious to those around him and in line with the dolphin, which his parents have given him as his spirit animal. In Pamplona his mom bought him a dolphin balloon. This accompanied him on his stroller for a day in a half before he gave it away to a small girl in a bar during a snack break. He makes friends wherever he goes and is already making a name for himself among the other pilgrims taking this same journey, each pursuing the course for his or her own reasons. Hudson is known for talking to the elderly in each town one lady who was 103 years old and her 92 year old friend sang him a song while he clapped along. Hudson is here with his dad to support mom as she travels step by step taking in the moments and being present, as they grow closer as a family.

This is a transformative journey for Hudson and he is excited to see how the following weeks of travel transform him as he continues to learn and experience many firsts. He is surrounded by a plethora of languages, cultures, foods, and experiences and he takes each new day with a childish yearning for growth and personal experience. At many stops along the way he get to see peoples outstanding generosity which includes a wine picker handing him a cluster of grapes, many little biscuits, small muffins, and extra pieces of bread from inn keepers and fellow peregrinos alike. It’s a blessing to see him take in each new vista from the safe and comfortable seat of his stroller and front pack strapped to his mom as he navigates the roads before him.

5 thoughts on “The Camino Adventure Begins”